Namibia is located on the south western coast of Africa bordering the Atlantic Ocean to the west (1500 km coastline), South Africa to the south, Botswana to the east, Angola to the north and Zambia to the north east. The name Namibia is derived from the oldest desert in the world, the Namib Desert.

Namibia was annexed by Germany in 1884 and remained its colony until 1915. In 1920 South Africa was granted authority by the League of Nations to administer Namibia and the country was considered the fifth province of South Africa, previously referred to as South West Africa.

Namibia gained independence from the South African apartheid regime on 21 March 1990 and is a multi-party democratic state that hold presidential and local government elections every 5 years, led by a President elected for two five-year terms. Government is divided in three tiers namely the executive, legislative and judiciary. Namibia for the first time has appointed a Deputy President and Deputy Prime Minister in 2015 and is the first country in the world to appoint a female Prime Minister.

The National Flag of Namibia

The National Flag is a symbol of Namibia’s struggle for national unity. It symbolises peace, unity and a common loyalty to Namibia. 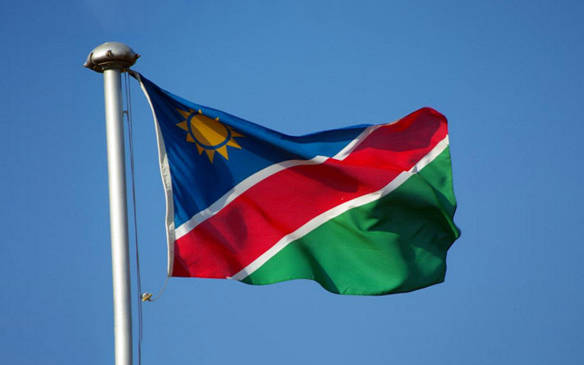 The Namibian Government is divided into three organs namely, Executive, Legislative and Judiciary. The legislative branch is responsible for making laws which are implemented by the executive and interpreted by the judiciary branch. 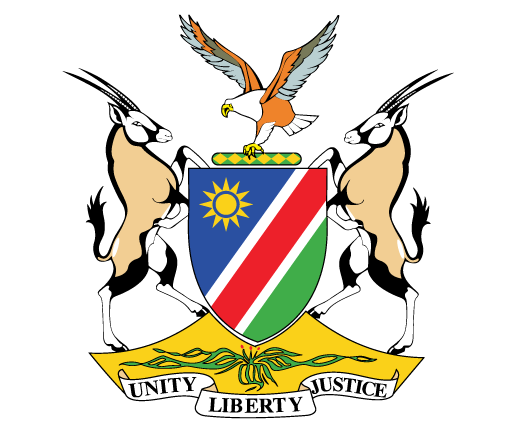 The economic sectors that contribute to the Gross Domestic Product of Namibia are categorized under Primary, Secondary and Tertiary as per the National Accounts of the country.
Visit www.nsa.org.na and www.bon.com.na for macroeconomic information and updates.

Sea There are two ports in the country, Walvis Bay Port and Luderitz Port. The Walvis Bay Port is the largest and strategic alternative port serving land-linked countries such as Zambia, DRC and Botswana. The port is also increasingly used for cargo destined for Angola and South Africa due to its non-congested and efficient service. For more information visit: www.namport.com.na.

Rail A northern branch line connects Omaruru, Otjiwarongo, Otavi, Tsumeb and Grootfontein. In the far north, Tsumeb is connected to Oshikango situated at the Namibian/Angolan border and Windhoek is connected to Gobabis, on route to the Namibia/Botswana border. For more information on rail infrastructure visit www.transnamib.com.na

NamPower is Namibia's national power utility, assisted by Regional Electricity Distributors (REDs). Currently functioning REDs are CENORED and NORED, which service the central-northern and far northern areas, and Erongo RED, which services the Erongo Region in the west. Premier Electric is another electricity distribution entity in Namibia. The Electricity Control Board is the industry regulator. Kindly visit the Nampower website www.nampower.com.na and the Electricity Control Board website www.ecb.org.na

As of August 2013, Namibia has 14 Regions with the split of the Kavango Region into Kavango East and Kavango West Regions.